Aslund on the Post-Soviet Transition

ArtirKel has been writing a series of posts on the economy of the Soviet Union, including a set of "brief remarks on the transition". For anyone entirely new to the topic, the conventional wisdom is that following the fall of communism eastern Europe underwent a massive economic depression. This was not a recession of the sort that we experienced in 2008; rather, we're talking Greece-times-two double-digit-recession-for-several-years-on-end. For those of us who advocate capitalism, then, this seems like evidence either for the superiority of communism or at the very least for the need for gradualism. Immediate moves risk severe collapse.

The main point of Artir's article is that while shocks resulting from transitions to capitalism may very well exist and in the short-run be quite significant, they do little to disrupt long-run trends - and in the long-run we are all dead communism is as we all know a terrible system. 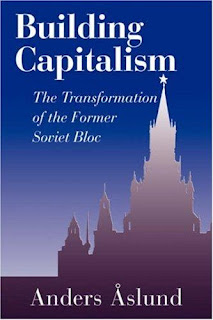 At the time I mentioned Anders Aslund's doorstopper Building Capitalism: The Transformation of the Former Soviet Bloc. Aslund makes the case in a section entitled "The Myth of Output Collapse" that the conventional wisdom is actually quite wrong about the magnitude of the collapse. Moreover, the countries which weathered the transition best were those which were swiftest to reform. Now that I have access to my copy again, it seemed worthwhile to write this post summarising Aslund's arguments in this section.

Economies were already in chaos (p. 122)

Aslund argues that the conventional wisdom ignores how weak the communist economies were at the time of their collapse. During the years 1989-91, the average former Soviet republic (FSR) economy contracted by around 11%. So to claim that without the transition there would have been no turmoil is straightforwardly false.

It's commonly believed - though I don't know if José himself would accept this - that Soviet economies had a persistent problem with over-reporting of output. The prospects for promotion of many people in the production chain depended not upon profitability but on recorded output, so there was a strong incentive to make over-exhuberant claims about the total product of one's empire. Aslund estimates, quoting some of his other research, that added around 5% to the reported GDP of the USSR.

More significantly, under capitalism there was significant under-reporting of output. There were two key reasons for this: firstly, massive expansion of the black market, which had been severely repressed under communism. Secondly, the splintering of industries into large numbers of small firms often left government statisticians unable to keep up. For example, for many years Hungarian statistics left out all firms with fewer than 50 employees, with the result that through the late 80s into the mid 90s the unrecorded economy never went below 27% of GDP.

When measuring GDP in market economies, we have a simple way to assess the value of a good: we look at how much people are willing to pay for it. Where the good is one that people do not pay for - policing, for example, or education, we move instead to looking at how much is spent.

The USSR had this for everything. The problem was that this allowed and even encouraged the production of many things that nobody wanted. Similarly, it encouraged excessive processing of products even when this failed to make the end-product any more useful or enjoyable. These useless products were counted as output in Soviet statistics, but if we are honest they were sheer waste. The move to capitalism merely exposed this. 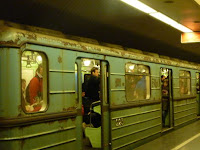 Communist countries traded almost entirely with each other. This meant that the distorted trade patterns which they had on a domestic level were amplified at the level of international trade. For example, under communism Hungary had a nice little export industry in machinery and buses. After the collapse of communism, suddenly no-one wanted to buy these - for reasons which will be obvious to anyone who has travelled on the Budapest Metro Line 3 (right).

Furthermore, much of the trade involved "implicit subsidies" from one Soviet nation to another, and particularly from energy producers to non-energy producers. The end of these subsidies didn't hurt the Soviet bloc as a whole, and indeed the central case of Russia it meant a substantial gain (amounting, if I'm reading Aslund right, to 17.7% of its GDP!). But it does add more knots to post-Soviet statistics.

As mentioned above, when assessing the contribution of government spending to GDP we have no better option than simply to look at the amount being spent. The USSR spent an inordinate amount of its resources on the military - Aslund suggests 22% of GDP, Artir thinks it was probably about 18%. Either way, this was several times the international norm of around 3%, to which Russia reduced its spending following the collapse of communism (most other countries reduced their military spending even further).

This would lead to a massive fall in measured GDP, possibly as high as 20%. Yet with the exception of those directly employed by the military, it will have had no effect at all upon people's standard of living. This is one of the weaknesses of GDP - it is perhaps the best proxy we have for living standards, but it is ultimately only a proxy.

The otherwise great economist Paul Samuelson predicted in 1961 that, since the USSR was pouring a greater proportion of its output into investment in further capital, it would overtake the US GDP some time in the 1980s or 90s. In hindsight this is an amusing story, but it also poses an important question: why didn't the USSR overtake the USA?

The answer is that much of the investment was simply wasted. Apart from the vast problems of co-ordination (section III), there were vast problems of theft and of managers demanding more inventory stocks than they really needed. For this reason, a lot of what was counted as investment was failing to contribute at all to future productive capacity.

Aslund produces a chart giving his estimates of GDP across the former USSR in 1995, indexed to 1989 levels. 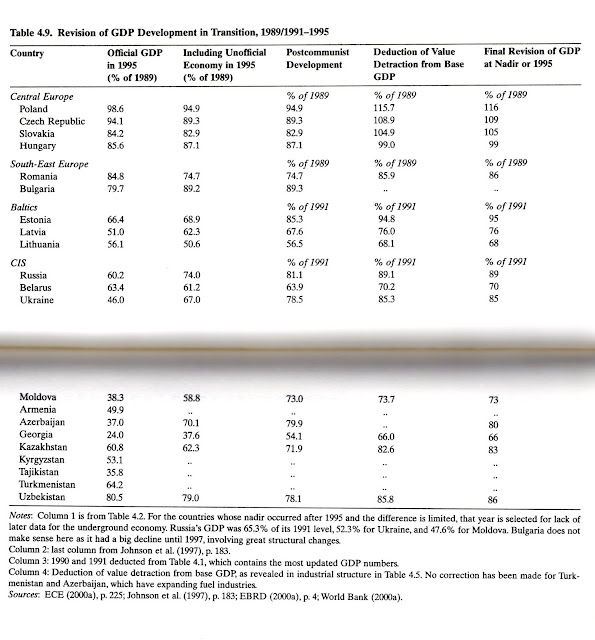 There's decline in many countries. However, this decline is highly variable, and some of the most reforming countries - especially what would later be the Visegrad Group of Poland, Czechia, Slovakia, and Hungary - even grow. This strongly suggests that to whatever extent there was indeed a collapse in the economies of the former USSR following the fall of communism, whatever caused it was neither capitalism nor the shock of transition.
Posted by Andrew at 14:05