A Retraction and An Apology

Several months ago I wrote a mostly-serious essay arguing the cosmopolitan case for #SpendTheSix. In one line I claimed that:

Typical practice during the days of the old Empire, as best we can tell, was to spend around 7% of GDP on the military.

I can't remember if I made any attempt to check this claim at the time, but it seems unlikely. It was half-remembered from a book I read sometime in my teenage years - most probably Niall Ferguson's Colossus: The Rise and Fall of the American Empire. As my memory records it, the book was briefly discussing whether continuing US military dominance across the planet was financially viable, and argued that the US spends around 3.5% of its GDP on its military compared to the 7% or so which the old British Empire spent. Hence whatever barriers there were to continued US hegemony would not be financial, etc etc. It should be noted that not only I am only about 70% confident that Colossus was the book in question, it is entirely possible that either I misread it at the time or that in the seven or eight years since my memory of the factoid has become confused. Certainly I do not wish either to accuse Mr. Ferguson of making this claim, or to suggest that my failure to properly check the claim when I wrote the essay was in any way excusable.

My attention was drawn again to this claim when, browsing Andrew Sabisky's Curious Cat, I discovered that he had cited this essay for the claim that "we did in fact historically spend the six, & not just during the cold war either". It occurred to me that I perhaps ought to check the veracity of this claim, so quickly googled "historical british military spending". From the results it seems clear that I could not have done this when I wrote the original essay. First, this article on the BBC website:

"It's often thought the British army in the 19th Century just mowed down natives with a machine gun. This is a myth," says military historian Nick Lloyd.
"The most remarkable thing is that they often had no technical advantages and we managed it by spending only 2.5% of GDP on defence, which is not much higher than we have today."


Defence began in 1900 at 3.69 percent of GDP but quickly expanded during the Boer War to 6.47 percent. After the war it contracted down to about 3 percent of GDP.

Third, this fascinating graph from ourworldindata.org: 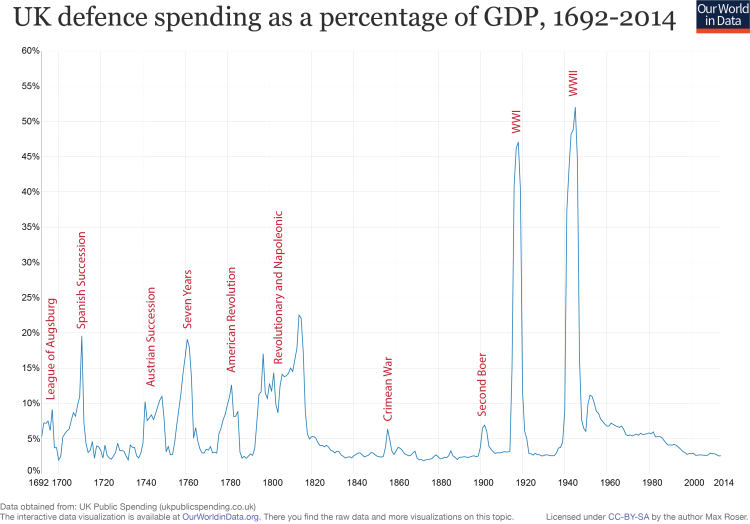 The first part of Sabisky's statement is supported - we have historically spent the six. Technically the second holds up in that we also spent the six during various wars, but I think that it would be fair to characterise this as misleading.

For what it's worth, I don't think the overall thrust of either Sabisky's or my argument is hurt to any great extent by this fact turning out to have been false - neither of us was arguing that we ought to spend the six because the Empire spent the six, merely trying to suggest that in historical perspective the claim would sound less absurd than it does to people who have only known the world of today. Nevertheless, it is entirely clear that I ought firstly to retract that claim, and secondly to apologise - to anyone who read my piece, to Andrew Sabisky, and to anyone else who encountered the claim indirectly through him or some other intermediary. It was not my intention to mislead, but I ought to have practised higher standards of scholarship - and hope that in the future I will do so.
Posted by Andrew at 12:08 No comments:

The Cult of the Composer: in lieu of an essay

NB: This is something I want to write as a proper essay, but have no idea about how to phrase. For this reason, I am simply stating the main claims and arguments here, with a view to converting them into an extended piece of writing at a later date.