It's been ages - well over a year possibly more than two - since I last did a links post. But my folder of interesting things on the internet has continued to grow and needs to be partially cleared, so here are a few things which may be of interest. Hopefully, since many of these were accumulated many moons ago, they will not be the same things which float around all the links posts and therefore have already been seen by anyone reading this.

Nervousness is a problem for many people, and this guy has a solution: Rejection Therapy, in which he goes around asking for odd things with the aim of being rejected for something every single day and so desensitising himself.

I have in the works a long essay about how I see mating patterns going in the future (spoiler: if I'm right, most people probably won't like it). Until then, here's a Vox essay on dating in the 20th and 21st centuries.

Cast yourself back into the dim mists of 2014. The music charts are full of songs from kids' movies, Facebook is dominated by #NekNominate and the Ice Bucket Challenge, and everyone is reading Capital in the Twenty-First Century, the summation of French economist Thomas Piketty's research into historical income and wealth distributions. Except they're not, as this WSJ article of dubious methodology suggests. Relatedly, here is a review by someone who hadn't read the book.

Let it never be said that you can't apply intelligence and rigour to understanding the Bible. To prove it, here is an exam in Theological Engineering.

Various weird musical instruments. And another.

One of the most interestingly evil business plans I've seen.

People who claim to be the world's fastest guitarist. This guy "only" gets up to 350 beats/minute, but maintains clear musicality. This one claims to reach 2000 BPM, but I'm somewhat sceptical about whether, if you slowed down the recording, you would find him having actually played all the notes. (For one thing, a difference of 7x between some of the world's fastest guitarists hardly seems plausible - surely there just isn't that much variation in how fast people can move their fingers?)

The kind of government that I hope we never lose: five-year-old boy loses his bid for a third term of office as local mayor. That said, the candidates for this mayoralty seem worryingly white and male.

Another portion of North America in desperate need of feminism: the Alaskan outback, where low population density, backward institutions, and a high male-female ratio have combined to give the state a rape frequency three times the US average. 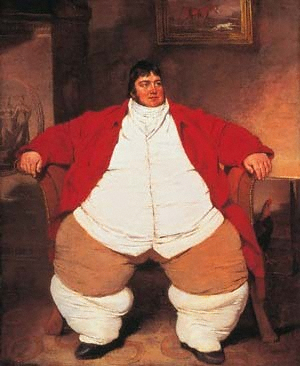 "You have never talked to a mere mortal. Nations, cultures, arts, civilizations - these are mortal, and their life is to ours as the life of a gnat. But it is immortals whom we joke with, work with, marry, snub, and exploit - immortal horrors or everlasting splendours.”

The Wikipedia page for Daniel Lambert (left), who was slightly shorter than me and five times the weight. He seems to have been a stand-up fellow indeed.

Another interesting person, though rather more recent: RIP Stephen Masty.

Women: is waking up on time a struggle? Worry no more: the vibrator-cum-alarm-clock (pun tolerated though not intended) has arrived!
Posted by Andrew at 15:36

Email ThisBlogThis!Share to TwitterShare to FacebookShare to Pinterest
Labels: Links