I spent the day in Stratford-upon-Avon, a picturesque but rather dull town which is chiefly famous as the birthplace of William Shakespeare. After a walk along the River Avon and a traipse through the Moving Arts and Design (MAD) Museum, in the afternoon I could find nothing better to do than to watch a play put on at the Swan Theatre by the Royal Shakespeare Company. The play, Volpone, was written by Shakespeare's contemporary Ben Jonson.

The play was well-performed and enjoyable. It tells the story of the greedy nobleman Volpone, who feigns sickness unto death in order to procure gifts from those who wish to ingratiate themselves unto him, and so be named his heir. The title character was very convincingly played by Henry Goodman. although to me it felt like just as important a character was his assistant Mosca (Orion Lee). Lee was less convincing - his flattery seemed to be laid on impossibly thick - but it was still an entirely competent performance.

The play was originally set in Renaissance Venice. This clearly was not - despite keeping the Elizabethan language, they used modern dress and a variety of modern gizmos (mobile phones, a stock exchange tracker, etc) and updated many of the references. The accents were varied - businessman Corvino (Matthew Kelly) spoke in a broad Yorkshire accent, his much-abused wife Celia (Rhiannon Handy) in a vaguely east-European accent, traveller Peregrine (Colin Ryan) is firmly American, and the only Italian accent to be heard is when Volpone disguises himself as a travelling seller of snake-oil. 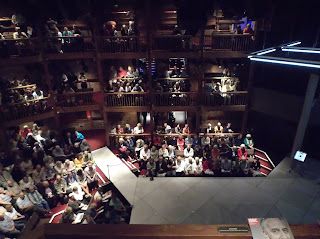 The ending of the play seemed very accelerated. An attempt by Volpone, Mosca and their various avaricious fools to frame Celia and Bonario (Andy Apollo) for adultery and battery goes awry when Volpone's love of mischief and Mosca's greed causes all to turn upon each other. Celia and Bonario are subsequently exonerated, which is fair enough; the judges then, with no further investigation, are somehow aware of all the underhanded dealings to which hitherto only the audience has been privy. There was some satisfaction in seeing so many unpleasant characters punished and the only two good characters (not the only likeable characters, to be sure, but the only good characters) leaving the court hand in hand (Celia having been granted a divorce "with her dowry returned in triple", and Bonario being granted the lands of his father, "who could not live well but may perhaps die well") but given that until not ten minutes hence all had been entirely under control, the sudden downfall of the main characters combined with a moralistic epilogue made the ending rather unconvincing. 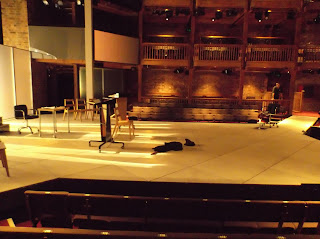 I didn't buy the program, although the cast-list which I do have mentions that it contains among various essays one by "leading financial journalist Gillian Tett on greed of modern-day bankers". Similarly in the trailer (below), director Trevor Nunn refers to the "fact" that "greed has not gone away, but has in fact increased". It didn't spoil my enjoyment, but it was disappointing to be reminded of how Guardianista the arts world is. 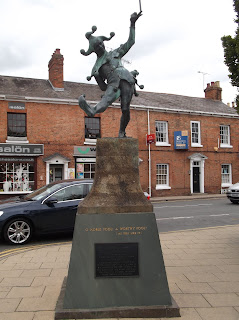 All in all, the play is well worth seeing if you're around Stratford. But putting a major national theatre in Stratford is stupid, because it takes a solid hour to get there even from Birmingham. I blame public funding of the arts, which moves theatre away from what people want to see not only by changing the plays which are performed, but also by moving genuinely worthwhile plays like this one away from audiences. In any case, is it worth going to Stratford to see? Probably.