In one of my political philosophy tutorials last semester, I was asked to defend the libertarian position on healthcare - that it should be private with minimal if any government intervention. I immediately brought up the issue of overconsumption: that, when someone is not bearing the cost of their consumption, they will tend to consume more than the socially optimal amount. It failed to convince the people playing Rawlsian liberals and religious conservatives who were also in the debate, but it was at least a sensible argument that people of many different should take seriously. (I'd suggest it also gave the lie to the whole point of the exercise, which was to develop an Overlapping Consensus: that is, an agreement on policy between all "reasonable and rational" people. In order to attain this for healthcare, a Rawlsian would denigrate the libertarian position as "unreasonable", a word which here means "unwilling to consider the interests of others", despite the thoroughly reasonable nature of my argument).

The reason I bring this up is because I'm now wondering it the problem is actually far worse. I'll present a simplified theoretical model first, then show the things I have been reading which led to this chain of thought. I haven't done any independent empirical research and so would be wary of the conclusion, but it certainly seems plausible. The articles I have been reading all concern the US; my model would predict that the problem should be worse in the UK, so that's something that really needs to be investigated as a test of the theory.


In general in an economic model, we would assume consumers to be perfectly-informed, perfectly rational utility maximisers operating within a budget constraint. Within medicine, the budget constraint is very weak due to subsidies, nationalisation, insurance etc, and so we will treat it as non-existent. There is also very limited consumer information; in particular, I suspect that consumers will systematically overestimate the benefits of more healthcare. Furthermore, I model the actual utility of increasing healthcare increasing at first, but then actually falling. Essentially, I am rejecting the axiom of non-satiation: the marginal private benefit of consumption would look something like this: 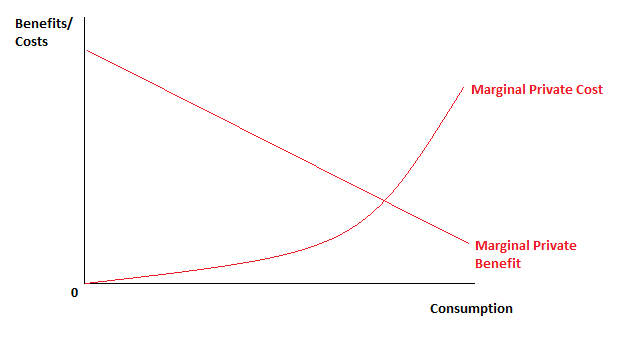 Given the absence of a budget constraint, we would expect the consumer to consume up until the point where Marginal Private Benefit (better health and longevity) equals Marginal Private Cost (inconvenience of treatment, pain). However, this is where we introduce the problem of lack of information, by which I suggest consumers systematically overestimate the benefits of more healthcare. 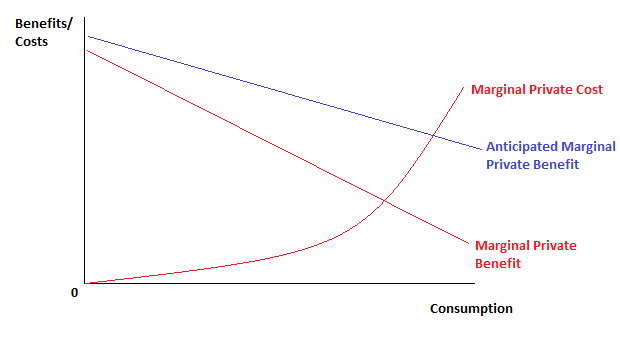 We clearly see overconsumption here, even compared to what the individual would ideally choose in a post-scarcity economy. I'll add in another cost line to show the cost to society as a whole, given that individual is not bearing the financial cost of healthcare: 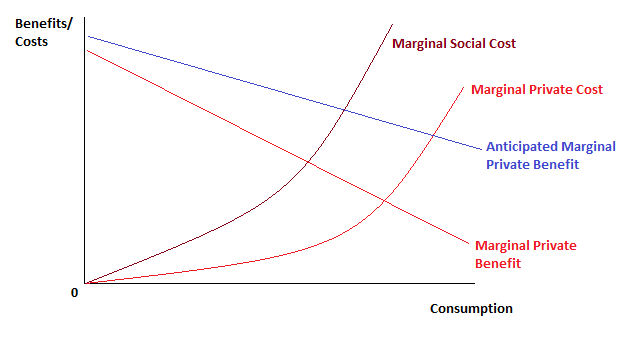 And to be fair, I should probably include a benefits line which takes account of positive externalities from healthcare - to concerned friends and family who have less to worry about, bosses who have less time off work to account for. These are likely to taper off with the higher levels of treatment, of course, since the increased treatment may restrict mobility and/or activity on the part of the patient. 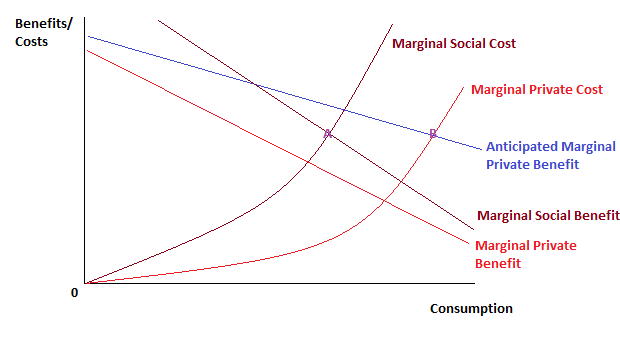 If I were aiming to provide an even better model of medical consumption, I would be likely to include a role for hyperbolic discounting. The effect of this would be to cause the consumer to underestimate the marginal private benefit of healthcare when young. However, my model is intended primarily as a model of healthcare among older people, where the effects are more immediate and so hyperbolic discounting plays less of a role.

In any case, is this such a problem? Some money is wasted on too much healthcare, antibiotics become that bit less effective - a pity, but surely it's far better to err on this side than to err on the side of underprovision?

This brings me to the reason I was thinking about the economics of healthcare. After reading Scott Alexander's half-hilarious-half-depressing parody of Piano Man by Billy Joel a couple of times, I went back to looking over some of his older posts on working in medicine. The first post I read at Slate Star Codex (as an actual follower of the blog, rather than merely as someone who followed a link from Marginal Revolution*) was Who by Slow Decay, which discusses the horrors which are to be found in hospitals. It links to an article entitled How Doctors Die, which talks about how most doctors would not go through the treatment to which their patients are subjected. From reading those, I would suspect that a substantial portion of healthcare spending on terminal patients is not even mere waste - rather, it is destructive. It puts people through painful, disgusting, repugnant deaths in an uncontrolled manner. Euthanasia would be a mercy, but even better would be to just stop f***ing CAUSING these horrible, miserable endings: let people die.

So how much of medical spending, then is not merely wasteful but actively damaging? Somewhere between a fifth and a quarter of lifetime medical expenses occur in the last year of life; of course, not all of this is on terminal patients and not all that is spent on terminal patients is destructive; that said, you don't need to be Robin Hanson to think a substantial portion of healthcare spending is counterproductive.


*Speaking of Robin Hanson, the MR link was to this article describing his talk on effective altruism. Reading over this again, I notice the following claim attributed to Hanson:


the real rate of return on investment has been higher than the growth rate for 3000 years and this pattern shows no signs of changing.

Robin argues that for this reason, it is better to save money and donate it all at the end of your life than to donate it immediately. There are rebuttals of this conclusion (e.g. opportunities for efficient charity dry up over time, we can do more good now than we will be able to do in future) but the quoted claim goes unchallenged. Compare to the current debate over Thomas Piketty's  Capital in the 21st Century, where right-wing and libertarian critics of the book have been eager to dispute the claim. There are many trained economists within the effective altruism movement, so surely the statement could have been challenged when Hanson made it? This leads me to suspect that challenges to the idea that r > g are frequently more about ideology than economics.
Posted by Andrew at 19:21