A somewhat simplified version of the natural rights view of political morality associated with Rothbard and Nozick would run roughly along the following lines:


I shall demonstrate that this argument is unsound, on the grounds that we can within a natural rights framework justify a state vastly larger than the minimal state given certain empirical assumptions. I make no comment as to whether these assumptions actually hold in the real world. 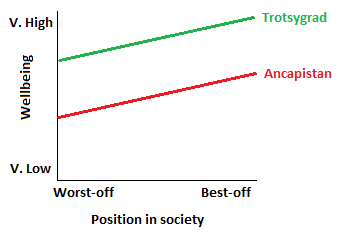 Suppose there are two societies, living side-by-side. They start off with equal allocations of resources, neither is subject to significant outside interference, and in fact the only difference between them is that one, Ancapistan, has no government at all while the other, Trotskygrad, has a government which interferes in many different activities. Contrary to all previous human experience, this massive government intervention works and people in Trotskygrad enjoy a remarkable standard of living - so much that the most well off inhabitant of Ancapistan (itself a pretty pleasant place to live) is still worse off than the least well-off person in Trotskygrad. Given a choice between the two, would you rather be born into Trotskygrad or Ancapistan?The answer should, quite obviously, be Trotskygrad. (Any fellow libertarians who might be reading this: admitting you'd rather live in Trotskygrad doesn't harm your pro-liberty credentials one jot.)

Now, I should go into a bit of the history of Trotskygrad. It was formed by a socialist collective of a few thousand people who grouped together to buy some land and form their own nation, under an explicit social contract carved out of granite and displayed in the central square. Every individual member of the collective signed a paper copy of this social contract, and any person wishing to become a citizen of Trotskygrad must sign the contract. This commits them to paying heavy income taxes, to remaining a citizen of Trotskygrad for at least five years, and to obeying all the laws agreed by the General Assembly - some of which can be quite onerous. In exchange they are guaranteed a job, healthcare, education for their children, and various other benefits of many different natures.

It seems then that anyone with the mental capabilities of an adult may then be compelled either to sign the contract, or to live elsewhere. The argument that one has grown up in Trotskygrad does not compel the community to allow one to stay, any more than an adult may compel his parents to allow him to continue living in his childhood home. Signing the contract represents consenting to being dominated by a state, with all that that implies. If an individual does not sign the contract, then Trotskygrad is no more obliged to accept the individual than homeowners are obliged to let strangers into their house.

Perhaps there are certain inalienable rights, which a person may not transfer to another person or to a group such as Trotskygrad? Perhaps there are, but it seems far from clear to me what these might be. In any case, it is hard to see how many activities of the state could fall into that category. Taxation can be seen as a way of paying for a bundle of services - protection against crime, education, healthcare etc - and while having the price of a good based upon your income is a very strange idea, and a highly inefficient way of paying, it does not seem particularly morally different from paying a fixed fee. Committing to live in a place? Perhaps it might not be possible to commit to this indefinitely (in which case the planned mission to Mars is already morally scuppered) but I don't see why committing to live somewhere for a few years is different to either working on an oil rig (where you're stuck on a platform in the middle of nowhere for a couple of months) or for a football club (where you sign a contract to play for them for several years). Making decisions for your children about education and such? Well, that applies to private education, not just state education.

Most people believe that we have certain obligations to others who are not so well off as ourselves. Indeed, a couple of months back the Manchester chapter of GWWC hosted a talk by an ethicist who went through pretty much every moral system which is still taken seriously by mainstream philosophers, and concluded that with a single exception they all led to the conclusion that we are obliged to give at least 10% of our income to effective charities. Now what if the most effective way of giving to charity were through the state?

Suppose that, by consenting to the welfare state, I make myself slightly worse off but in doing so bring several beggars off the streets. Then, assuming there is nothing better I could do with the money, it seems sensible to conclude that I have a moral obligation to consent to the welfare state. (Alternatively, I could of course not consent and instead make a private charitable donation with the same effect, but why would I given that by stipulation I would be better off compared to this had I simply consented?)

And so, it might be that I must consent to the state even though I am worse off for so doing. If this is the case, is the state justified in presuming that I consent and acting as though I already had? I'm really not certain - I have a vague intuition that it would be, but this is of course no substitute for systematically thinking the problem through. And as I intend to explain tomorrow, the question is in any case moot.

To conclude, even within a natural rights framework, individuals may consent to the state and indeed may have a moral obligation to do so - however, this relies on certain assumptions about the state improving people's lives.
Posted by Andrew at 15:44