From A Theory of Justice, page 76:

A distribution cannot be judged in isolation from the system of which it is the outcome or from what individuals have done in good faith in light of established expectations. If it is asked in the abstract whether one distribution of a given stock of things to definite individuals with known desires and preferences is better than another, then there is simply no answer.


In this passage, Rawls is actually talking about the importance of equality of opportunity, but it sounds a lot more like something out of Anarchy, State and Utopia. We frequently think of Rawls as "the minimax guy", and certainly that is the aspect of his principles of justice which has received the most attention, so it is quite interesting to see him giving so much weight to a conception of procedural justice - albeit a rather more demanding version of it than a Nozickian would advocate.

I remember, back when we were first studying Rawls, the lecturer would present us with two graphs like the ones below. He would ask us about which we thought was a better society. If I were to go back in time, I would be equipped with a pretty smart-arse response. 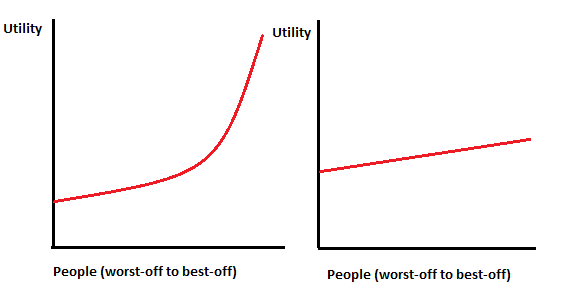