In his podcast Conversations with Tyler, Tyler Cowen always takes the opportunity to ask his interviewee for quick-fire opinions upon a range of topics. He does not ask them whether a thing is good or bad, however, but rather whether it is "underrated or overrated". In some sense there is an obvious reason for this: by declaring something either overrated or underrated, you commit yourself to disagreement with general opinion. This is an easy recipe for an interesting conversation.


In another sense, though, it is very puzzling. Why should you have to express a negative opinion of something that may genuinely be very good, merely because other people also like it? Indeed, many goods and media - Facebook being the most obvious example - a large portion of the value derived by an individual comes from the fact that others also enjoy the product. We form communal experiences around much of our culture - (most) people go to concerts and films together, and they discuss these evenings afterwards.

There is, however, at least one realm where the underrated/overrated question remains very important and that is tourism. A place that is overrated will be expensive and often disappointing; a place that is underrated will generally be cheaper and pleasantly surprising. There are advantages to famous places, of course - they tend, for example, to have rather better infrastructure for tourism (information centres, easy travel options) - but they are also more crowded.

All this is a long-winded way of expressing my opinions on Ljubljana and Lake Bled, which I was able to visit at the end of October. Both were pleasant, worth seeing, but would probably not (in my view) have merited a trip from the UK - but whereas Ljubljana is pleasant and underrated, Bled is pleasant and overrated.

That's all the summary; the rest of the post is (parts of) the trip told primarily through pictures.

We went down on a Friday, catching the train from Budapest and arriving mid-afternoon.
After taking our bearings and withdrawing some Euros, we headed for the Old Town. The centre of Ljubljana is Preseren Square, named after the national poet France Preseren and featuring several landmarks of the town.

When we got there, I was amused to see some evangelical Christians. We have these in Britain of course, but in Britain they preach within an assumed Protestant context. Not so for these Christians:
After securing beds in a hostel for the night - we had a place booked via AirBnb, but this was not due to start until the next day - we went for a meal and a wonder around the Old Town.


The next day, we spent most of the morning wondering around the city as part of a guided tour.


After seeing these, we spent the early afternoon visiting the National Museum.


In the evening, two of us (one of my travelling companions was running in the marathon the following day, and so wanted to avoid pushing herself) walked up to Ljubljana Castle. The castle is situated on a hill up the walk upwards is demanding, but rewarding with marvellous views of the city and the sound of music wafting up from the various clubs and bars.
On the Sunday, the two of us who were not running the marathon briefly stood around to watch it start, went around the Natural History museum, and then headed off walking in the hills of Tivoli Park. My companion was astonished at the size of the park; I was less impressed at the time, but upon examining maps in retrospect it turns out to be more than twice the twice of Budapest's City Park, and perhaps eight to ten times the size of Platt Fields in Manchester, and probably a solid 30% larger than Hyde Park in London. It was the height of autumn, and the ground was crisp with golden fallen leaves. 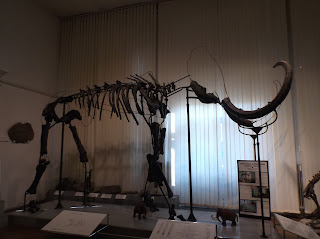 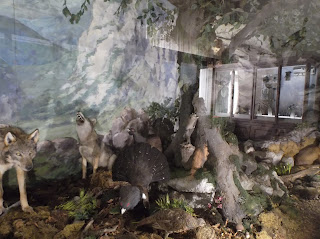 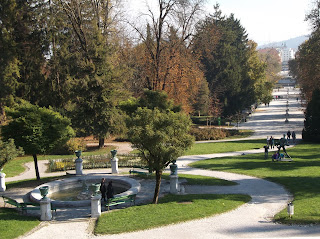 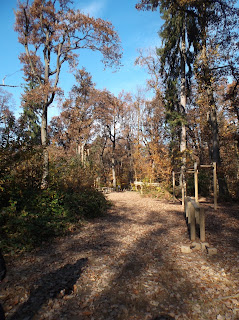 Ljubljana is not a large town, and by this point we had exhausted most of the tourist destinations. Moreover, many of them would be shut for the next two days - Mondays because they always shut on that day, and Tuesday because it was the 1st November. (This extended to supermarkets, which closed unexpectedly early on Monday and did not open on Tuesday, leaving us without food for the train journey back). Therefore on Monday we caught a coach to the famous Lake Bled. The coach was overcrowded, to the point that we spent the first half of the journey sitting on the floor until some people got off.

Eventually we arrived and were greeted with some adorable views of the lake and castle. 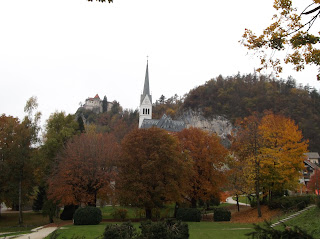 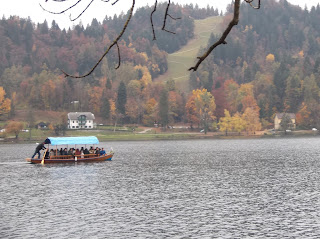 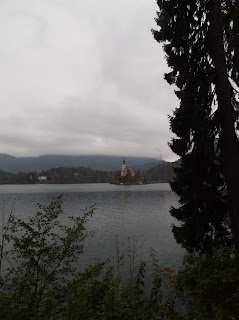 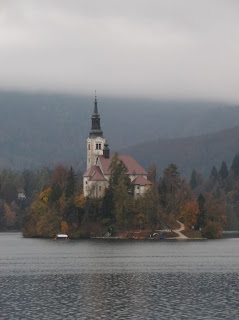 First we walked along the lakeside. After reaching the other end and seeing that there was not much there beyond a couple of restaurants and a canoe rental, we found a path winding upwards towards the castle. 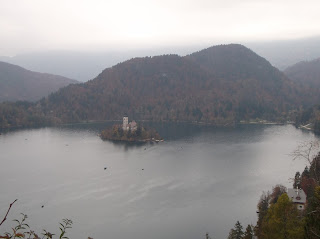 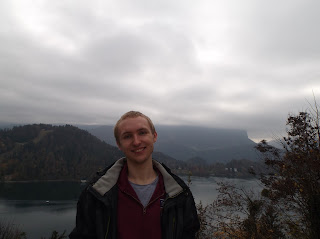 At the entrance to the castle there was a Hallowe'en-themes medieval fair going on, aimed mostly at children. After a brief look round this, I went into the castle while the others, baulking at the entrance fee, decided to make their way back down.
After the first half of the day being overcast, the sun came out while I was in the castle. This improved the views to be had, but made photography harder due to Bled Island lying in-between myself and the sun. 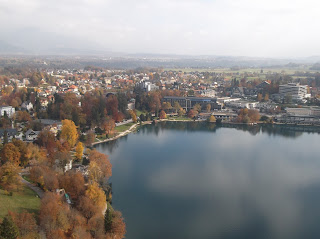 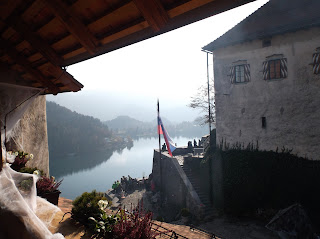 After meeting at the lakeside, we were rowed across to the island. A violinist and pianist were playing tunes, mostly Viennese, and admiring the scenery as waves lapped at the boat and the music drifted over the water was surely one of the most belle epoque experiences one can enjoy. 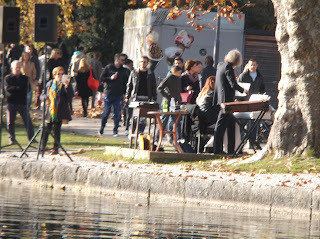 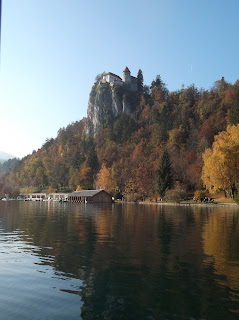 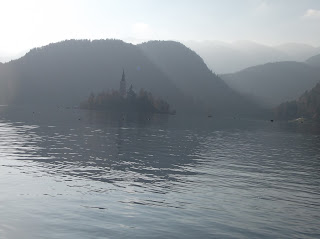 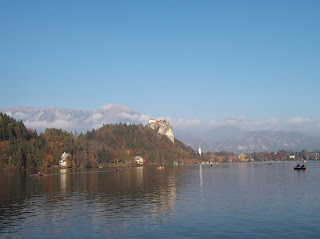 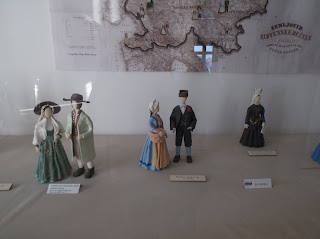 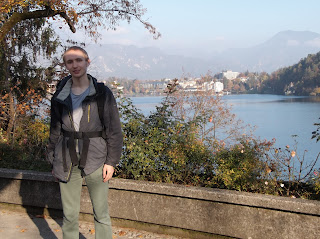 After returning to the mainland and narrowly missing the 3:30pm coach back, we sat at a café where I was able to enjoy some excellent Slovenian red wine.

That was the last touristic experience of the trip - in the evening we struggled to find places to eat, I took a few photos, and the next morning we had to catch the 8:45 train, arriving in Budapest early evening.
Posted by Andrew at 10:02