The Shift from Polyamory to Monogamy

Today the following paper abstract has being going around Twitter: 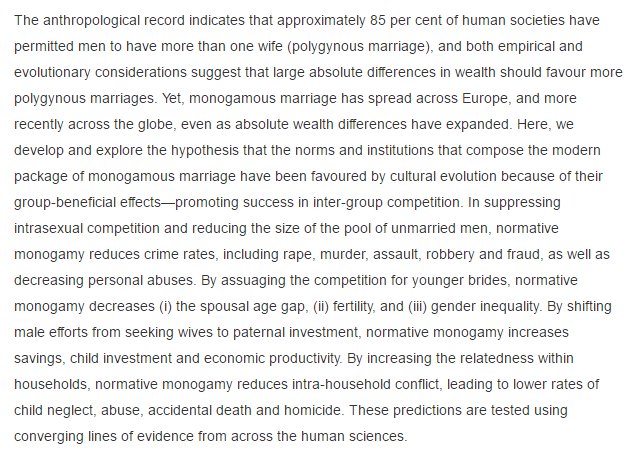 The original paper, The Puzzle of Monogamous Marriage by Henrich, Boyd, and Richerson, is here. I intend to read the paper in full, but before doing so I intend to write out my own theory of why there has been a transition from polyamory to monogamy. This theory is one I have held for a while, and which is probably not original to me, but I have not seen it made fully explicit anywhere. (It is heavily influenced, however, by my reading of Matt Ridley's The Red Queen). The general thrust of my argument is that household structures are for the most part chosen by individuals - and especially by women - in a way that seeks (roughly) to maximise their genetic footprint. The key changes which cause different choices to be made are essentially economic: hence the dominant cause for the move to monogamy is the industrial revolution and associated rise in the incomes of the general population.


What do women want?

Females of sexually reproducing species require a male contribution in order to pass on their genes to the next generation. The contribution of males can be neatly divided into two parts: the genes, and what we will call "paternal investment".

Genes make a contribution firstly in the obvious sense that reproduction is sexual. But it is also important to not that not all genes are created equal: some are more useful than others for passing on genes, in that these genes will lead to stronger, healthier offspring. If a female is able to assess which of two prospective mates will give her more vigorous young, then this is a strong reason for her to favour reproducing with that one.

Anything which is passed on genetically from parents to children is a potential source of assessment for males. Height is a good example of this: if it is advantageous for a woman to have tall children, then she will be more attracted to tall men.

Paternal investment represents a vast array of things a male might provide for a female in exchange for her bearing his young; what he offers varies massively according to species and environment. If the female will be vulnerable while raising his child he might offer her protection against predators; if the environment is harsh then he might supply her with food; in humans, a considerable part of paternal investment consists in emotional support for the mother.


How do these affect family structure?

The more important genes are to the choice of male partner,the more likely a species or society is to be polyamorous. Imagine a group of women are asked to vote on who, in their personal opinions, is the most attractive out of a group of men - none of the men or women ever having previously met each other. The women will come to their personal choices based on a variety of metrics - height, looks, intelligence, charisma - and while it is unlikely that they will unanimously agree on the most attractive men, it is unlikely that they will disagree wildly either. In species where genes are the only contribution of the male to his children, the average "family" consists of a man, his harem, and their children.

In many species, however, there is some measure of paternal investment. The nature of this investment will effect how far the species moves away from monogamy. In particular, investments which are difficult to provide for multiple females tend to push in a monogamous direction.

An investment which is relatively easy to provide for multiple females is protection. Species where the sole contribution of the male after conception is protection are typically not so different from those where the male contributes only genes. Examples of this include many mammals, such as lions.

Resources such as food are rather harder to provide for multiple females. Food provided to one mate is food which cannot be provided to another mate; hence environments in which food is scare are often conducive to monogamy. Indeed, in some extremely barren environments, where multiple men are needed to support a single woman, we have seen polyandry: wives having multiple husbands. To give you a preview, my claim will be that changes in the availability of food and other such resources are the key reason for societies moving from polyamory to monogamy.

Prior to industrialisation, famine was an ever-present threat. A bad harvest might kill all of your children. This meant that your wealth could have a very considerable impact upon your ability to raise children to maturity. Since a lord or king could be hundreds of times richer than an ordinary peasant, then, he could maintain hundreds or even thousands of times more wives or concubines. These men would maintain harems consisting not only of their wife but also of servants and "ladies-in-waiting" - and perhaps also, to some extent, the wives of the men around them. Ordinary peasant men might not marry at all, and if they did it would frequently be only once they had been earning for some years.

Then, between the late eighteen century and the mid twentieth century, there developed what we now refer to as the first world: the wealth of the average man shot up, and in the 1900s there emerged welfare states which defrayed many of the financial costs of raising children. It was no longer important for a woman to marry a rich man, so long as she married a man who was gainfully employed. The choice between men, then, would be made on a number of metrics: men with good genes would typically have the first pick of women, but even those with poor genes obtained a wife. Wealth did not cease to be important, but higher wealth would now get you a more attractive wife rather than getting you multiple wives. Furthermore, paternal investment could take non-monetary form: being an interesting person to be around, for example, might aid a man in obtaining a woman of his choice.

One prediction I will make based upon this theory is that, as women increasingly come to out-earn men in the workplace, paternal investment in general will become less of a factor. Consequently, genes will rise in relative importance, and so we will see an increase in polyamory.


Advantages of my theory

My theory has, as I see it, two big advantages over the theory of Henrich et al. First, I avoid postulating group selection. Second, I have an explanation for why polyamory used to exist. Going by the abstract, Henrich and his collaborators have an explanation for why monogamy emerged but not one for why it took until a relatively recent point in history to emerge instead of being the natural human condition. Or perhaps they do - I'll have to read the article and update based on that.
Posted by Andrew at 17:19