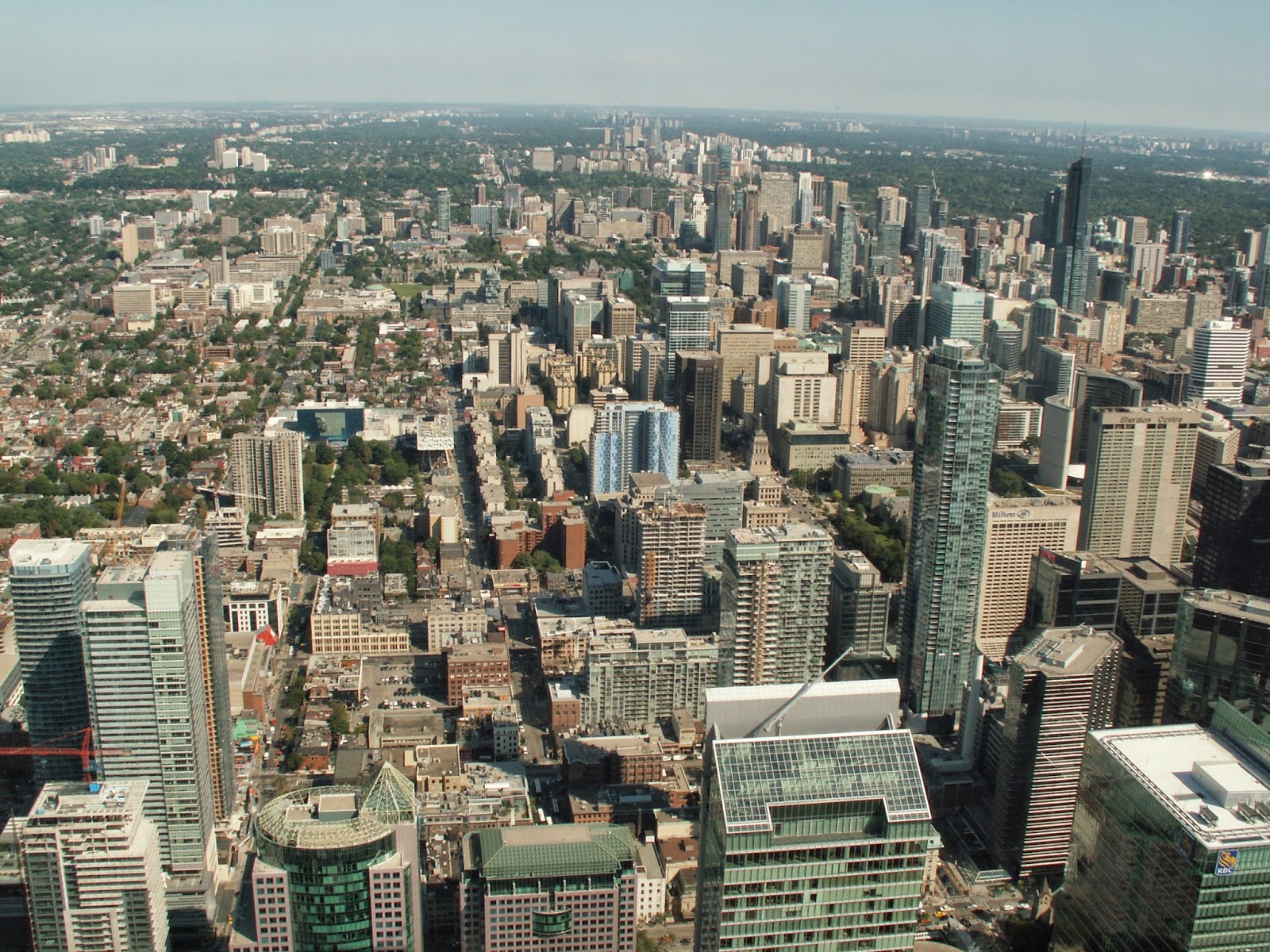 2. Instead of using the space to build outwards at low cost, the Canadians take a perverse delight in their skyscrapers. The picture on the right was taken from somewhere up the CN tower, and demonstrates the sheer density of skyscrapers, most of which would be the tallest building around had they been built in any British city (with the exception of London).

Calgary provides another example. When the Calgary Tower was built in the late 60s it had a commanding view all around; nowadays that view is blocked by all the other buildings around it.

3. The CN Tower, by the way, was well worth going up. That said, at $100+ for three of us to go up I'd have been significantly more reluctant had it been my own money being spent.

4. The St. Lawrence Market is also well worth a visit, and has the important virtue of being free to enter. That said, my guess is that the experience is significantly better if you (a) eat meat and (b) have cooking facilities.

5. The Art Gallery of Ontario was very enjoyable. Unfortunately, it does not seem to have an online guide to its paintings. I did find an online picture of an artwork which was only there temporarily: Thunderbird, by Wally Dion (above). From a distance it appears to be a crude, almost cave-painting-like picture of the legendary Native American Thunderbird; close up, you realise that the entire thing is a collage made of computer chip breadboards.

6. Speaking of Native American stuff, that's something they really play up. Tourist shops are full of inuksuks and totem poles, one of Banff's most notable tourist traps is the "Old Indian Trading Post"... I saw far more Inuit tat than Mounty tat, despite the fact that I was never within a thousand miles of where the Inuit have historically lived. (That said, I did meet a couple of guys who I presume were Inuit - we got talking in the sauna at the hotel in Toronto, and they mentioned living about 8 hours north of there and having come down in order to be checked over by a doctor. They also had a remarkably low tolerance for the sauna, finding the heat to be too much after barely five minutes). 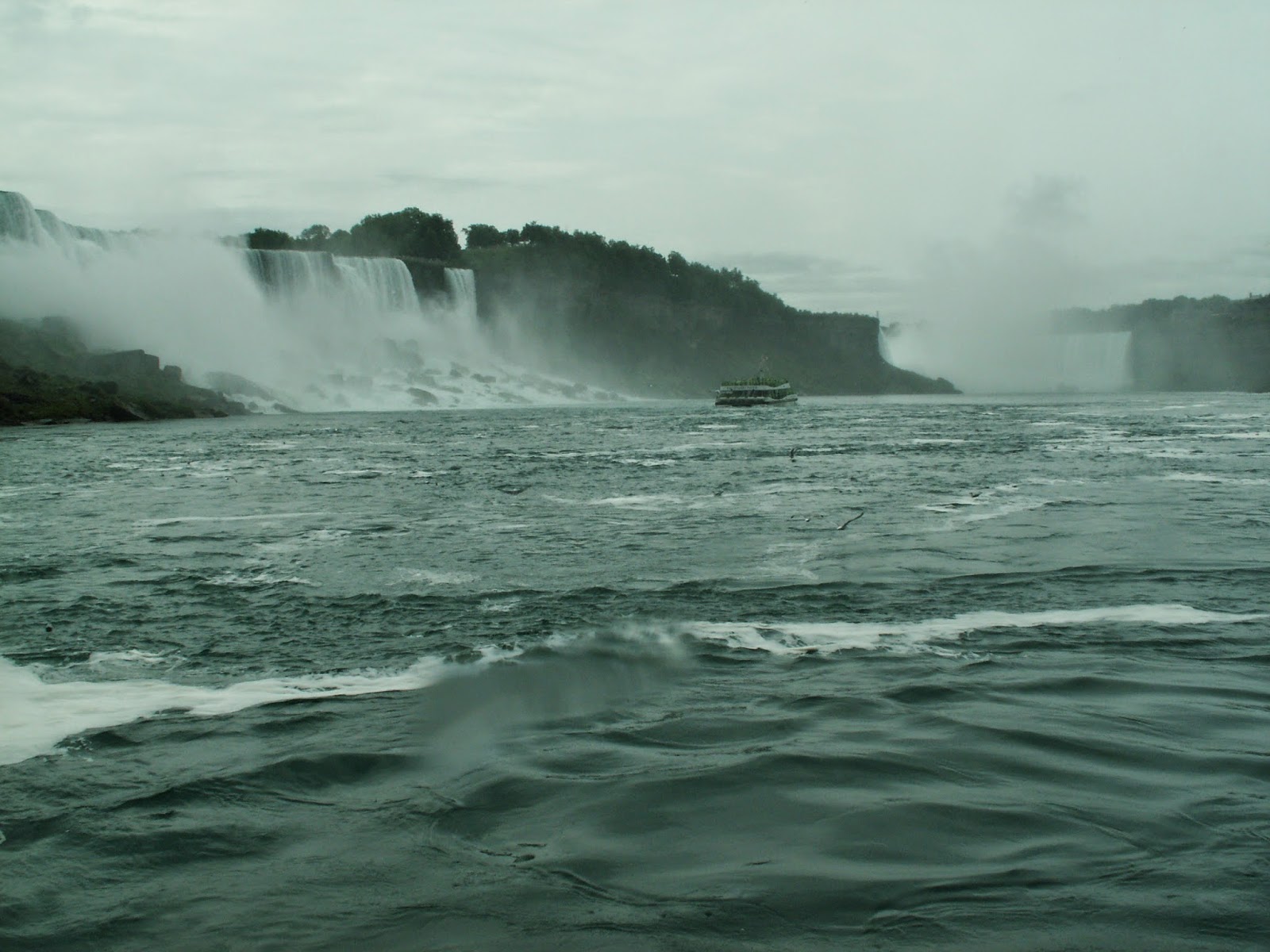 6. Niagara Falls is another place well worth a visit, especially if you're on the Canadian side of the border.

7. Banff has some pretty scenery, but I would suggest that it is for the most part overrated. The lakes are pretty, but the glacier is all in all a bit dull, and the mountains aren't especially different to anything you could see in north Wales or the Scottish highlands. Sure, the Rockies are taller, but how many people can really tell the difference between a 3000-footer and a 6000-9000 footer when they aren't next to each other? Wales is also generally less commercialised.

8. That said, among the various tourist shops was a genuinely good art gallery/shop. My favourite painting there, with a price of approximately 5 dead Africans, was Shimmering Light by Rod Charlesworth.

9. Spending two days on a train is about as dull as you would expect.

10. One of the things which surprised me about Canada was how American it was. I have a vision of America, derived from films and TV, and I always assumed that Canada would be something of a half-way between that and what we might label "European culture". I was wrong, it's far closer to the American end of that.

11. Nowhere was this more obvious than in Kamloops, British Columbia, which held an unmistakable area of "Hicktown, USA".

12. Another thing which was evident in most places but most obvious in Kamloops: Canadian girls are - on average - prettier than British girls.

13. I didn't see all that much on Vancouver, but what I saw I liked. I was rather amused by a church which advertised "Jazz Vespers". 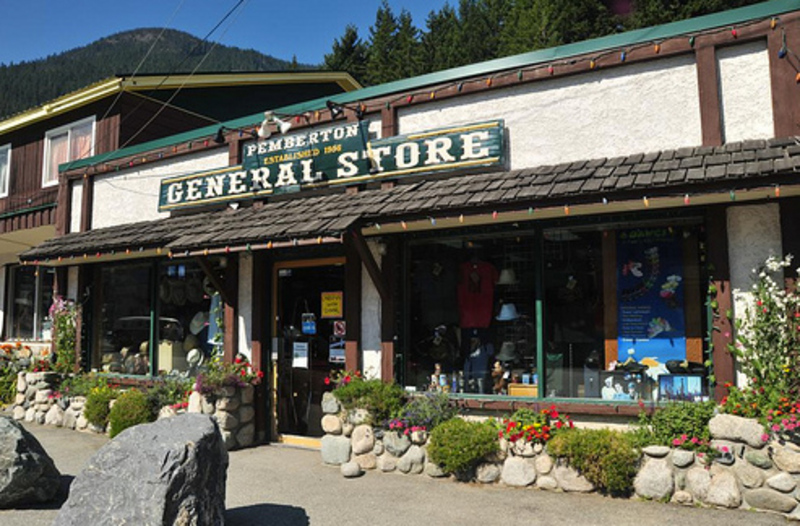 14. The forests of British Columbia are pretty. The non-forested bits are a mixture of alright-to-look-at mountains and ugly barren wasteland. One town by the name of Pemberton deliberately played up the Wild West feel with an authentic-looking (at least from a distance) General Store. It also had a pretty neat store called Odd Potatoes where we picked up for remarkably cheap prices a nice sharp knife and a slotted spoon which for some reason were not included with the motorhome we were hiring.

15. More on the everything-is-big-in-America theme: the trains! I don't think I saw any that were longer than about 180 trucks, but I didn't see many which had fewer than 120.

16. Canadians have a weird food culture. They seem far more concerned about their food being "organic" than Britons do, but lack anything of a vegetarian scene. I'm told Toronto has an excellent scene for ethnic food, but didn't see any of this due to my parents disliking any foreign food which isn't Chinese and my brother not even liking that; in other places they have many excellent steakhouses.

17. Before going there, I sort-of expected the grid system of roads to be more efficient than the ring-road system which dominates British cities. I was wrong: what it means is that you have to stop at a set of traffic lights every 50-100 metres, which really slows everything down.

I don't plan to return to Canada any time soon, and if I did then I would probably skip over large parts of it. That said, I enjoyed the trip and don't regret going.
Posted by Andrew at 14:23

Email ThisBlogThis!Share to TwitterShare to FacebookShare to Pinterest
Labels: Goings-on