The Idiot's Guide to Dark Magic This is a pile of books which has accumulated over the last couple of weeks in the charity shop where I am currently volunteering. During my less busy periods on the till I have glanced over some of these books, and I intend to present some of it in a hopefully entertaining fashion.


Face to Face with God
As the name might suggest, this is an (ostensibly) Christian book. However, it presents a view of our relationship with God which pretty much every Christian I know would consider to be heretical. Instead of encouraging you to just pray like a normal Christian, it provides advice on how to "ambush" God, and presents the process of getting to speak to Him as an arduous journey. The rhetoric of the book reminds me of the writer in one of Adrian Plass' diaries who contends that the idea of moving mountains with one's faith is intended to be taken entirely literally.


Practical Candleburning Rituals
Surprisingly, this book is also an ostensibly Christian one. See this page, taken from the contents section: 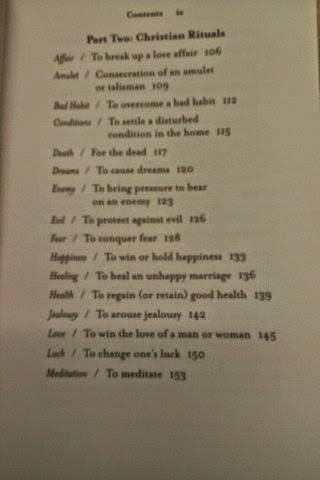 As an example of what is meant by "Christian rituals", take this ritual designed to "win the love of a man or woman": 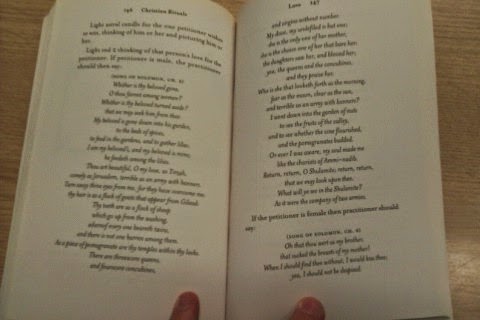 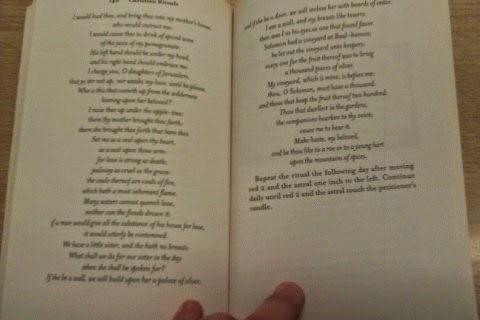 Essentially, these are standard pagan rituals - legitimated by the inclusion of biblical readings, in this case from Song of Songs. Given that followers of organised religions tend to be less superstitious than the average citizen of developed societies*, I also wonder what the target audience of this book is.

Book of Spells
My manager was interested to know whether there were any spells which would cause every customer to spend £50 in the shop, so I looked up the section on "prosperity". Unfortunately the best day to perform such spells is Sunday - i.e, the one day when the shop is closed - and the best time to perform them is 5AM - i.e. well before the shop opens. I guess the shop will have to work without the undoubtedly awesome power of magic.

Psychic Development for Beginners
Well, this at least contains some solid practical advice. For example, see this guide to moving cars out of your way when they're driving too slow for your tastes: 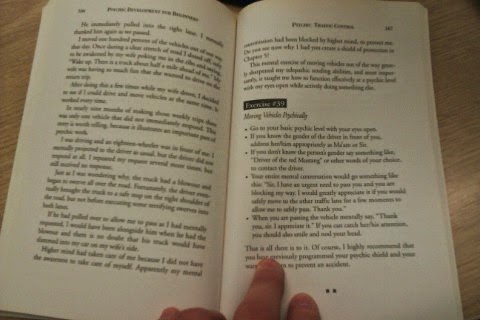 Or alternatively, the author's instructions on how to remotely reserve yourself a convenient parking space:

Before I would leave home I would alter my basic state of conciousness to my basic psychic level and visualise the parking space nearest to the building to which I was going (supermarket, work, etc).

I would visualise the space as being empty, with a sign on it that read, "Reserved for Bill Hewitt."

Guess what! It worked one hundred percent of the time!


Homeopathy
This provided an interesting introduction to the history and the theory behind homeopathic "medicine". Homeopathy was first practised in the 1790s by Samuel Hahnemann, a trained doctor who was dissatisfied with the state of formal medicine ("alleopathy") at the time - and to be fair, this was at a time when bloodletting (that is, having a patients' blood sucked out by leeches) was still being proscribed as a treatment. He devised a theory that the body has certain "natural healing powers", and that therefore rather than seeking to treat a disease we should encourage the body to heal itself. He recognised that many symptoms of disease are in fact side effects of the body fighting disease (whether this was actual medical knowledge or merely a lucky guess, I don't know) and for this reason recommended that a disease be treated by consuming substances which produced bodily reactions similar to those of the disease to be treated.

As for the whole "the more dilute the active substance, the more effective it is" thing? Apparently that hypothesis was the result of genuine experimentation, when Hahnemann found that the more he watered down his cures, the better his patients ended up doing.

Having started reading from a pretty sceptical standpoint, I came away with the tentative conclusion that homeopathy was probably more scientifically grounded and less harmful than the official medicine of Hahnemann's time - after all, this was more than half a century before Ignaz Semmelweiss would come along to persuade surgeons to perform the basic task of washing their hands between operations - but does not seem to have really advanced since then, whereas modern medicine has of course improved immensely since then. It's as if the conventional wisdom of 1794 was "We must burn half of everything we produce, so that evil spirits will leave us alone!", Hahnemann came along to say "No, that's silly. We should only burn 20% of everything we produce, my experiments show that we end up better off this way," and then 220 years later conventional wisdom has moved on to "Burning our things is stupid. Boy are we glad we don't do that any more!" while Hahnemann's followers are still yelling "No! We must burn 20% of all we have, lest we be assailed by evil spirits! You madmen!"

*I can't remember where I read this, but it was the finding of a genuine study, honest! If there are any anti-religion people reading this, then please remember that this would be perfectly well explained by the brain having a certain level of superstition it tolerates/demands and religion satisfying this, so this is hardly a strike in favour of religious people being more rational than unbelievers.
Posted by Andrew at 15:21