Following on from here:

The first dance I headed to on Saturday afternnon was a Contra dance, with music by Vertical Expression. Unfortunately I didn't make any notes, but from what I can remember two weeks on it the music was fine and the calling was by Rhodri Davies, who is the best dance caller I have yet to encounter. 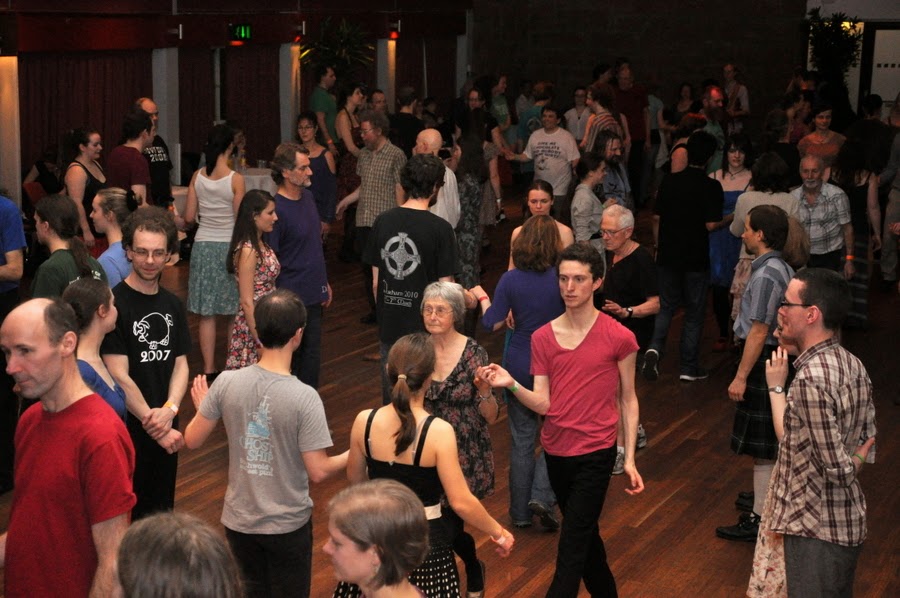 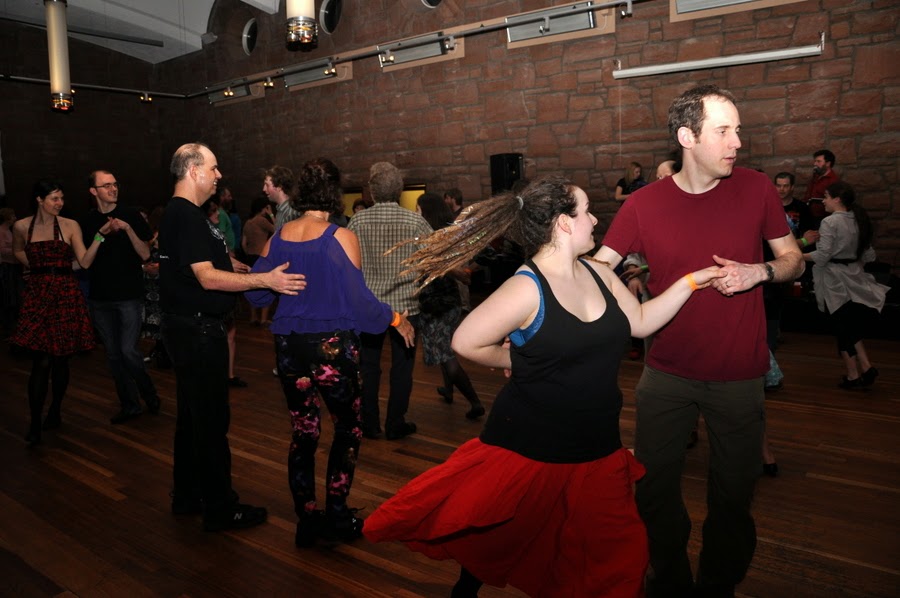 Pictures of the Contra Dancing, taken by Arctica Lsdnwikwnef (many thanks!)

I wanted to do a range of different dances, so at about 10:15 I headed across to McEwan Hall for a Scottish country dance with music by the Ian MacPhail Band. The description of the dance in the event program notes that earlier in the day there were workshops on Scottish country dance at which people could "try the footwork and become experts in some of this evenings dances!" It also notes that this is merely optional and is not in any way necessary, but perhaps this is not entirely truthful: it involved the most mentally taxing dancing I've ever done. It was still enjoyable, but I felt rather a lemon trying to get right all the approaches and turns and reels and repeatedly failing. McEwan Hall was an incredible location, though. Obviously I don't have any of my own pictures, my camera having gone by this point, but the one below is from the internet; imagine it without any of the chairs and steps in the middle.

After this, I headed back to the sports hall in order to plan Sunday and to sleep. The first workshop I went to on Sunday morning was the annual "Dances with a Difference" session, which was great fun. The most memorable dance was one in which the eight dancers of a set pretended to be a helicopter, although the one which most impressed me with its design was a long-wave sets dance with many turns and do-si-dos, each leading immaculately into the next. The venue was another good one, the debating hall at Teviot House - very  elegant and neatly furnished. I had fun trying to imagine Adam Smith and David Hume on the stage.

Following on from this, I went to a session entitled "Songs of Scotland" taken by a young guy from the university. It was a good session, although at first the singing was weakened by the lack of handouts of the words for some songs. This was one of the songs we sang, though as you would expect it was considerably less polished. The session is also notable for having produced the only photo of the weekend in which I can find myself (centre-right, just to the right of the guy on the chair): 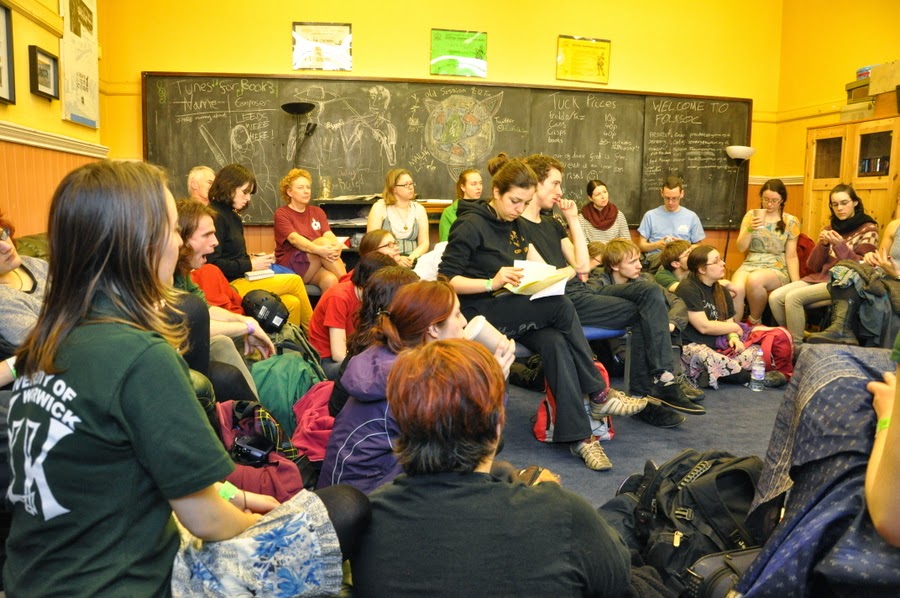 The final workshop I went to was one about how to call for ceilidhs. It was something of a mishmash of advice, but helpful nonetheless - considerations like how to hold a microphone, how far ahead of an action to call it, and the necessary communications you need to make with the band and the organiser. We were invited to ask to call dances at the Survivor's Ceilidh, which I decided against on the grounds that I couldn't think of any dances which I know well enough to be confident calling them out for 200 people, even with a card with the moves written on it, but I'm planning on trying to memorise the steps of a handful of dances and looking to call a dance next year.

After the workshop, I made my way to the Hobgoblin stage for the Survivor's Ceilidh. This is the final dance of the weekend, starting at 13:00 and lasting three hours although most groups tend to leave early in order to be home at a reasonable time. Usually, the Scots would be first to go but of course this year, as hosts, they stayed right to the end. Another consequence of the location was that we ended not with a polka - as would happen south of the border - but with everyone standing in a circle, joining hands, and singing Auld Lang Syne.

After the ceilidh had finished, I made my way in the direction of the city centre but there were still a couple of hours to kill before my train would leave. After a brief look round an art shop and a conversation with a couple of other people from the Manchester Folk & Ceilidh Society who I happened to meet coming out of the shop, I once again went to Greyfriars. Unfortunately, it was once again locked, so I made my way over to Holyrood Park for a walk. The hills in the park offered some impressive views of the city and of the North Sea, which made me even more annoyed at my failure to charge my phone before coming. Here are couple of photos I found on Google: 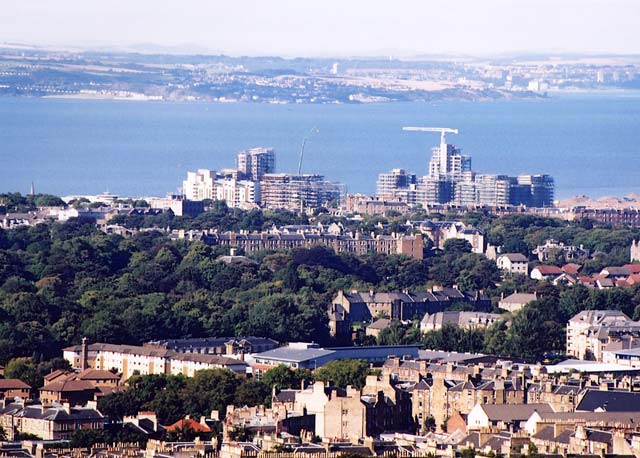 Finally, I made my way to Waverley station and got onto the train, eventually getting back to my house in Manchester at about 10 PM, covered in mud from a couple of falls in Holyrood Park (I considered dipping into the Scottish Parliament building with the intention of cleaning up, but reasoned that they weren't worthy of my dirt) but having thoroughly enjoyed the weekend. I'm now very much looking forward to the next IVFDFs, in Exeter (2015) and Warwick (2016)!
Posted by Andrew at 18:49