Against the minimum wage

The basic economic argument relating to the minimum wage is that a minimum wage is fundamentally no different to any other price control, and so just as the economic policies of the current Venezuelan government have caused a shortage of toilet paper, a minimum wage will lead to a shortage of jobs (or an excess supply of labour, the two being the same thing), i.e. unemployment. In the labour market situation represented by the graph below, P0 and Q0 are the wage level and employment level in equilibrium, with OQ0 being both the number of people seeking work at the prevailing wage and the number of jobs that businesses can profitably provide at the prevailing wage. Hence the only unemployment in this situation is "frictional unemployment" - people who are between jobs, but will find employment. The imposition of a minimum wage at the level marked leads to OQ2 people offering their services, but only OQ1 jobs being offered, with resulting unemployment of Q1Q2. 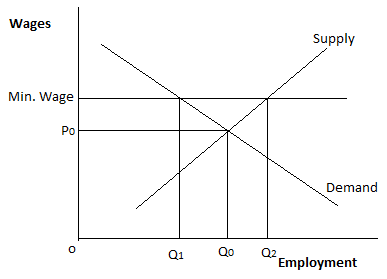 In practice this may be difficult to measure. Employers will generally be more likely to cut back on employing new people than to get rid of existing employees, and if a minimum wage impedes the starting-up of new businesses which would initially be unable to pay the minimum wage then this will not show up in a straightforward analysis of hiring patterns of businesses. Nevertheless, one can find empirical evidence for it: for example, in the absence of a minimum wage there is no particular reason why young people should find it harder to gain employment than older, more experienced people - they can simply demand a lower wage to account for their lower productivity. A minimum wage denies them this ability and so we should expect to see abnormally high youth unemployment in places with higher minimum wages - as indeed we do.

There is, however, a theoretical model with quite contrary implications. It rests upon an assumption of an uncompetitive labour market, with an essentially monopsonistic (monopolist = one supplier, monopsonist = one buyer) employer. (Another assumption running through all of these models is that all workers are equally productive; that said, the models would work just as well if we were to allow for different productivity between workers and simply assume that the most efficient workers are employed first. However, the model would become a bit more complicated and I'm trying to keep things simple). 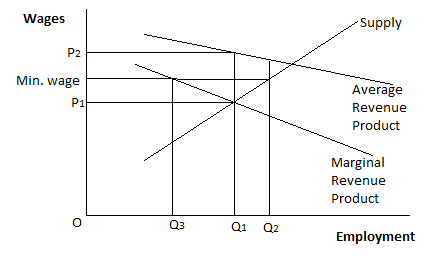 The Marginal Revenue Product is the productivity, in terms of revenue created, of the most recently employed individual; the Average Revenue Product is the average productivity, in terms of revenue created, of all individuals. One of the fundamental theorems of microeconomics is that the profit-maximising firm will employ up to the point where the profit from the last worker (i.e. Marginal Revenue Product) is equal to the
cost of employing that worker (i.e. the wage level). In this model, in equilibrium the firm will employ OQ1 workers and derive OP2 in revenue from each, but due to its monopsony of labour will be able to get away with paying only OP1 in wages, thus extracting an abnormal profit of P1P2 from each worker. However, if a minimum wage is imposed at the level marked, the idea is that the company will, rather than cutting employment back to OQ3, instead accept the reduction to its abnormal profits. Furthermore, in the initial situation the limiting factor on employment was that few people were willing to work for the wage being offered, whereas now that the wage is higher, they will seek jobs. The company will still be able to profitably employ these, and so employment will actually increase.

Personally I find this model unconvincing. Firstly, as bad as the labour market is, it is nothing like a monopsony. Secondly, I fail to see why the firm wouldn't just cut employment back to OQ3.

The more common argument in favour of a minimum wage is that "Yeah, the standard argument applies, but unemployment wouldn't increase much, and would be outweighed by the gains to those who keep their jobs." To this, I would first point to the fact that we measure unemployment separately from normal unemployment, and secondly to these posts by Bryan Caplan. Advocates of this view tend to cite a paper by David Card and Alan Kreuger from 1994 which found a moderate increase in employment. In contrast with many other opponents of the minimum wage, Caplan believes the paper to be very high quality, but due to the sheer weight of counter-evidence it fails to provide enough evidence for him to change his beliefs.

Or course, all of this leaves aside various other arguments against the minimum wage. In particular, I'd recommend this Steve Landsburg piece as a moral argument.
Posted by Andrew at 16:35