While browsing a far-left website I came across an article entitled "6 Things Every Environmentalist Needs to Know About Capitalism". The article was so stupid and so easy to refute that I thought I'd do so quickly here.

#1: The Population Can't Stop Growing under Capitalism
Sure it can. If the relative cost of raising children rises - which one would expect to happen if wages are rising - then the number of babies being born will fall. They even disprove their own point: "And, as a shrinking population ages -as it did in Japan – there is a severe shortage of workers to maintain basic services for the aging population. In the case of Japan, they had to import large amount of workers, but this is clearly not a globally viable strategy."  So the fact that, once migrants are ignored, population falls in certain capitalist countries is supposed to be evidence that population can't stop growing under population?

It is of course possible that I'm misinterpreting them and they mean not that it physically can't, merely that it would be very bad - that the population can't be allowed to stop growing. This is at least supported by what they write, quoting from two other people that "Negative or zero population growth can pose serious problems for a capitalist society always in search of new markets for its goods and requiring a continual expansion of the labor force and of the relative surplus population of the unemployed in order to meet the needs of production and profits." It's still nonsense, though. If people are getting richer, then they can spend more upon goods without requiring a larger population. Furthermore, have they never heard of Creative Destruction? In the free market loads of firms go out of business, and this is a good thing because it frees up resources for the firms which are acting efficiently. That's where new human resources come from.

#2: The Economy Can't Stop Growing under Capitalism
You say that like it's a bad thing! Perhaps they mean that growth implies consuming resources and that resources are limited. However, this is also factually wrong. There are two ways of achieving economic growth, which are a) to use more resources and b) to use the same volume of resources more efficiently. While we have spare resources, as is the case at the moment, we will use both methods of growth. If a resource is being depleted, then supply will fall and therefore the price will rise, which firstly stops growth through greater resource consumption and secondly greatly increases the returns to attempting to grow by increasing efficiency and by finding alternative resources.

As an example: consider the whale. In the 19th Century whales were caught and killed for their oil. They were almost driven to extinction. Thus, they became harder to catch and whaling became less profitable. People were on the lookout for other sources of oil, so when it was discovered in the ground there was a very quick move across to this new oil, and the practice of whaling ended pretty much completely.

#3: Capitalism Can't Plan Ahead
As David Friedman recently pointed out, this is pretty much diametrically wrong. If I have an asset then I will wish to protect it for the long term in order to sell it in the future. This rests on my being assured that I will keep possession of the the asset until the time I sell it, and thus on a secure system of property rights.

They talk of "natural limits" to the size of particular markets and assert that these are ignored. The most obvious limit is simply consumer demand, and that just isn't something which can be planned years in advance, especially for an individual market. Not by businesses, not by the state, not by any mortal who has ever lived or will live. This is something where you want a short-termist, responsive supplier of goods. Like, for example, free market firms whose profitability depends upon their responding correctly. If they mean things like global warming, then this is nothing to do with planning, simply a matter of externalities. Go read some beginner economics.

#5: Environmental Degradation Disproportionately Hurts the Poor
What does this have to do with capitalism? This is a (dubious) claim about Environmental Degradation (which I suspect would worst affect major landowners, most of whom are pretty rich), which is a completely separate thing from capitalism. Perhaps you believe there is a link between the two, but you could at least say that then.

#6: The Jevons Paradox: Sustainability isn't Sustainable
The claim here is that increasing efficiency of use of resources actually leads to greater consumption of resources, because the lower cost of consumption induces people to consume more.

This is a matter of basic microeconomics. 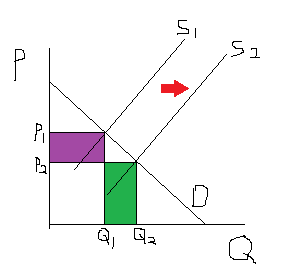 This is a basic graph plotting the Price of a good (Y-axis) against the Quantity bought and sold (x-axis) with normal demand (that is, the higher the price, the less people buy of it) and supply (the higher the price, the more of it people are willing to produce and sell) marked by the lines D and S1. Price and quantity are in equilibrium at Q1P1, so that an equal amount of the good is being bought and sold. An increase in efficiency is an decrease in cost of production and hence an increase in supply, from S1 to S2. This leads to a new equilibrium at Q2P2. More of the good is being consumed at a lower price.

Let us suppose, for the sake of argument, that the entire cost of the good is in non-renewable resources. (This is a very reasonable assumption for our purposes, since you can always assume that the scale of the P-axis is non-linear and that the labour costs etc are below the line). Then the decrease in resources consumed due to higher efficiency is the area coloured purple, and the increase in resources consumed due to the lower cost is the area marked green. They are claiming that the green area will be larger, apparently in all cases. If they do indeed believe that it is always the case, then this claim is clearly wrong, as this graphs with different equations for supply and demand shows. 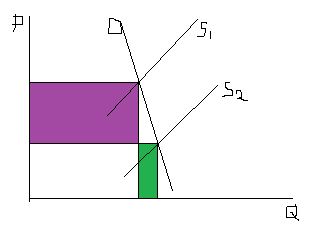 The problem with this is that there are plenty of polluting goods with low PEDs. For example, fuel to heat houses (when prices of essentials rise, people tend to just grin and bear it rather than freeze) and to power cars (the car itself is a very large part of the cost of driving, and road taxes are at least noticeable. Both are (almost) fixed costs, which remain constant regardless of how much driving you're doing; hence, by the time people decide that driving isn't worth the costs for the benefit it brings, the benefits are probably fairly small). Indeed, most transport has fairly large fixed costs - aircraft, ships, etc - so a rising cost of fuel is unlikely to massively affect the use of transport.

What about their empirical example? Well, this was in the middle of the industrial revolution, so it's hardly surprising that coal usage was increasing. Really, an intelligent lower-sixth economics student could have worked out all of this.
Posted by Andrew at 19:13